POSTAL STAFF SIDE SUBMITTED SUBJECTS FOR DISCUSSION IN THE ENSUING MEETING OF THE JCM POSTAL DEPARTMENTAL COUNCIL.

A List of 135 Issues are submitted for discussion in the JCM Meeting. 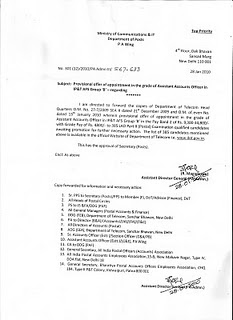 List of 385 Officials who were offered AAO Promotion as published in the DOT web site is formally thus forwarded to all the Circle Heads for necesasry further action.

NFPE is hearing complaints that some Circles are taking stand not in commensurate with these orders of the DoP and DoT in violation of the Gazette Notification and Ministry and DoT and DoP directives. This will be taken by the NFPE / CHQ for remedial action.

NFPE / CHQ will also appeal for inclusion of IPOs / ASPOs who were desiring to accept the AAO Promotion once again with the Secretary Department of Posts.

The latest orders issued today by the Postal Directorate is placed for the information of our AAO Promotees. 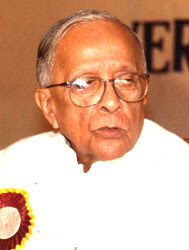 THE WORKING PEOPLE OF INDIA HAVE LOST THEIR INDOMITABLE LEADER.

COMRADE JYOTI BASU, AS A LEADER OF THE WORKING CLASS AND AS CHIEF MINISTER OF WEST BENGAL, HAD GRACED SEVERAL NFPE ALL INDIA CONFERENCES INCLUDING OUR AIPEU GROUP 'C' AND GUIDED US ON OUR TASK BEFORE THE TOILING PEOPLE. WE SUFFER AN IRREPARABLE LOSS.
ALL INDIA POSTAL EMPLOYEES UNION - GROUP 'C' TAMILNADU CIRCLE
DIPS ITS BANNER IN HONOUR OF THE DEPARTED LEADER. 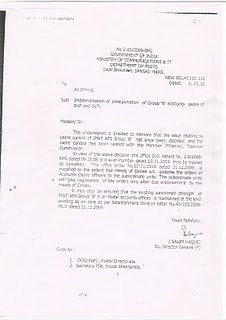 DEPARTMENT OF POSTS ISSUED LATEST ORDERS INTIMATING THE DECISION ON CADRE CONTROLLING AUTHORITY OF P&T ACCOUNTS
THE DISPUTE ACCORDINGLY STANDS SORTED OUT AND THE MEMBER - F OF DOT WILL BE THE CADRE CONTROLLING AUTHORITY 9.10.2009 AND 13.11.2009 ORDERS OF THE DOP STANDS CANCELLED 31.12.2009 ORDERS OF DOP STANDS MODIFIED TO THE EXTENT THAT ALL THE CHIEF POSTMASTERS GENERAL WILL NOW ENDORSE THE ORDERS OF ACCOUNTS CADRE OFFICERS TO SUBORDINATE UNITS THE LATEST ORDERS OF DOP ON THIS ISSUE IS PLACED ABOVE FOR THE INFORMATION OF OUR MEMBERS - DOOR IS NOW FINALLY CLEARED FOR THE PROMOTION OF ALL AAO PROMOTEES

Wish you a Happy Pongal 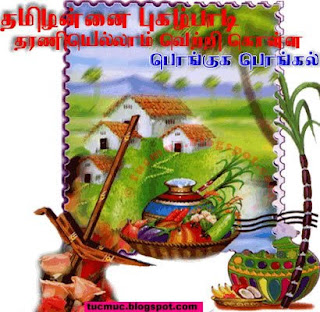 Wish you and your family a

Let it brings all health & wealth to you and your family.

RE-GRADING OF ACR BY DPC - AN IMPORTANT ORDER BY DOPT

NO. 2101 1/1/2005-Estt.(A)
Government of India
Ministry of Personnel, Public Grievances and Pensions
Department of Personnel and Training
New Delhi, the 6th January, 2010
OFFICE MEMORANDUM
Subject:- Effect on modification/expunction of adverse remarks in the ACRs and upgradationldown-gradation of the overall grading in the ACRs prior to the period 2008-2009.
The undersigned is directed to say that instructions were issued vide O.M. of even number dated 14th May, 2009 by which the complete APAR (previously known as ACR) including the overall grading and assessment of integrity shall be communicated to the concerned officer for representation if any, with effect from the reporting period 2008-09 which was to be initiated from 1.4.2008. Prior to that only adverse remarks in the ACR were required to be communicated for representation, if any. The then existing instructions further provided that the overall grading in the ACR should remain unchanged even after modification or expunction of the entire adverse remarks. It was left to the DPC to re-determine the overall grading if it considered that the expunction of such adverse remarks had so altered the quality of the ACR. The matter has been further considered and it has been decided that in those cases where the reckonable ACRs prior to the reporting period 2008-09 are to be considered in a future DPC on which the adverse remarks of Reporting I Reviewing / Accepting Authorities have been expunged or modified by the Competent Authority, the "overall grading" in the ACR be kept blank for appropriate re-grading by the DPCs. The existing grading shall be blocked in such cases. It has also been decided that where the authority has upgraded / downgraded the overall grading without giving sufficient reasons, the DPC shall treat such an exercise as non-est/ invalid. General terms, such as "I agree or disagree with the Reporting Officer /Reviewing Officer" used by the Reviewing I Accepting Authority shall not be construed as sufficient reason for upgrading / downgrading the overall grading given by the Reporting Authority / Reviewing Authority. The proposals for the DPC where ACRs upto the reporting period 2007-08 will be taken into account should specifically bring out these guidelines.
2. It is also made clear that past cases already decided will not be re-opened.