பிசினஸ் ரிபோர்ட்டர் , புது டெல்லி  ஜனவரி 19  2011 ....  செய்தி
Salaried taxpayers with no other income could get a respite from filing tax returns. The income-tax (I-T) department is open to examining a proposal to exempt them from the annual chore.


Asked whether the department would think about doing away with income-tax returns for employees, who had no other income apart from salaries in a financial year, Central Board of Direct Taxes (CBDT) Chairman Sudhir Chandra said the department would certainly consider the proposal.

He agreed that for a substantial chunk of salaried employees, savings bank interest is the only additional income and that in most cases, this not substantial. This proposal, if approved, will benefit a large section of people and would reduce the I-T department's workload in a big way.

Of the country’s 35 million taxpayers, roughly half are salaried employees.

The proposal to do away with returns for salaried taxpayers was earlier internally mooted within CBDT a few years ago. The argument in favour of the proposal was that income records for this class of taxpayer were available with both employers and banks.

In an interaction with mediapersons today, Chandra also promised small taxpayers another major relief. He said the I-T department is planning to release all small-value refunds before March 31. "I will ask my officials to give most refunds by the end of the current financial year," he said.

“We will try to clear most refunds in a month. At least small refunds can be given by March 31,” Chandra added. The newly-appointed chairman said he would communicate this to his officials.

Some of the refunds will be given to taxpayers directly through State Bank of India under the refund banker scheme.
.............. JR ,  மாநிலச் செயலர்.

2. It was informed to the staff side that Dte has issued instructions vide letter No. 137-12/98-SPB.II, dated 29.04.1998 to all Postal Circles advising them to avoid posting of ladies staff where basic amenities are not available in the office. It was decided in the meeting by the Chairperson that instructions on the subject be reiterated to all Heads of circles for strictly compliance.

3. In the Directorate’s letter No. 137-12/98-SPB.II, dated 29.04.1998, it was inter-alia advised to avoid posting women employees where there are no basic and essential amenities for women, Circles are, therefore, requested to scrupulously follow these instructions before women employees are posted/transferred from one work place to other. It may be ensure that women employee is transferred to an office only after ensuring that basic and essential amenities for women are available there. The Circles are also requested to identify these offices which are lacking basic amenities and take action for providing them immediately.
Yours faithfully,
Sd/-
(Suraj Bhan)
Asstt. Director General (SPN)
..............J.R.,  CIRCLE SECRETARY.

2. It is therefore, requested to that the ad-hoc promotion initially made in HSG.I as per instructions contained in this Department’s letter of even number dated 20th November 2006 and as per Sub para 3 (ii) of the letter dated 01st May 2009, may be further continued accordingly.

The All India Consumer Price Index number for (Industrial Workers) (Base 2001=100)
for the month of November 2010 is 182 as announced by Statistics Department, Labour,
Government of India.

Based on this index, expected increase from January 2011 may be 6%. Dec.2010 CPI figure
Not yet announced. The correct percentage would be arrived only on getting Dec.2010
Figure.

1.This is regarding stepping of pay of promotee senior with reference to direct recruit junior appointed on or after 01.01.2006.

2. The issue was examined in this office and referred to Ministry of Finance for clarification. Ministry of Finance Department of Expenditure Legal Cell vide U.O. No. 18/28/2010-Legal dated 29.12.2010 has clarified that the stepping up of pay of the promotee senior with direct recruited junior appointed on or after 01.01.2006 may be agreed to subject to fulfillment of the following conditions: -

(b) Further, Government servants cannot claim stepping up of their revised basic pay with reference to entry pay in the revised pay structure for direct recruits appointed on or after 01.01.2006 as laid down in Section II of part A of First Schedule to the CCS (RP) Rules, 2008, if their cadre does not have an element of direct recruitment or in cases where no junior is drawing basic pay higher than them.

(c) Stepping up of pay of the seniors in accordance with the present advice of this Department shall not be applicable in cases where direct recruits have been granted advance increment at the time of recruitment.
3.. The issues prevailing in the Circles may be decided as per above clarifications.
Sd/-
(Surender Kumar)
Assistant Director General (GDS/PCC)
தோழமை வாழ்த்துக்களுடன் ........ J .R , மாநிலச் செயலர். 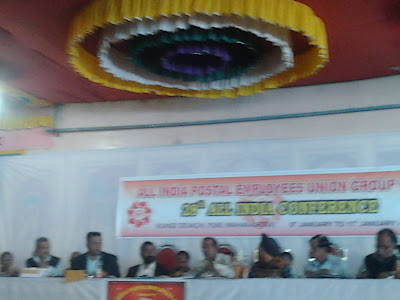 
This is the first time, an affiliate of National federation of Postal Employees is forming a mahila sub committee for encouraging the women employees in organizational activities.

stepping up of pay to the promotees at par with direct rectts.- orders under issue

1. Stepping up of pay with junior direct recruit in the case of promoted officials prior to 01.01.2006.


2. Detailed clarification about not to misuse the contributory negligence provisions. 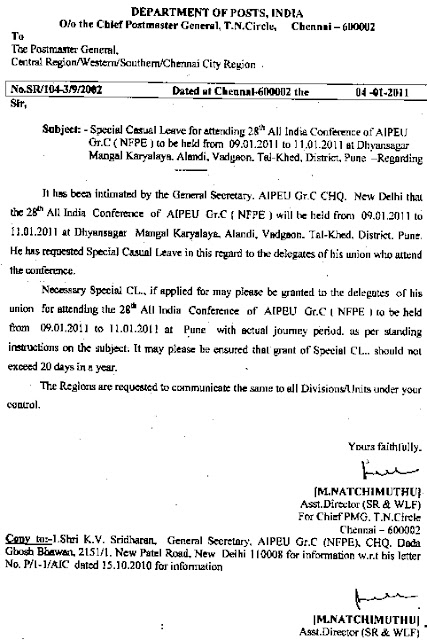 Sub: Filling up of GDS Posts in Branch Post Offices-review of guideline regarding.

Sir/Madam,
Reference in invited to this Directorate letter No. even dated 14th Jul 2009 on the subject cited above which provided for the manner of filling up of GDS vacant posts in single handed branch offices and branch post offices having two or more hands.
2. Provisional appointment for a brief may be resorted to only on account of sudden death, dismissal, removal, put off duty, absorption against the departmental post of Gramin Dak Sevaks and unauthorized absence for long period in case regular arrangements cannot be made immediately.
3. In the case of posts falling vacant due to discharge form service of the GDS BPM or absorption of the GDS BPM on the regular departmental posts, efforts should first be made to fill up the posts by adjusting identified surplus GDS fulfilling the prescribed qualification & other prescribed conditions failing which action should be taken in advance to fill the vacant post of GDS BPM on a regular basis by following the prescribed procedure and following other conditions prescribed under letter No. 17-103/2007-GDS dated 14 Jul 2009. The list of all the GDS, category wise, due to be discharged from service in calendar year may also be displayed on the Department's website in the month January of each calendar year.
This issues with the approval of competent authority.
Yours faithfully,
Sd/-
(AK Sharma)
Deputy Director General (Estt.)
Phone No. 011-23096098
OOOOOOOOOOOOOOOOOOOOOOOOOOOOOOOOOOOOOOOOOOOOOO


2. It is intimated that the above schedule is tentative and examination will be held subject to availability of vacancies and as per the administrative convenience. Necessary action may please be initiated to complete to pre-examination formalities to ensure smooth conduct of examinations.
Yours faithfully,
Sd/-
(L. Mohan Rao)
Assistant Director General (DE)
அன்பு வாழ்த்துக்களுடன் ....... JR   மாநிலச் செயலர்.

CASUAL LABOURER ORDERS KEPT IN ABEYANCE- GDS WILL NOT BE ENTRUSTED