2. The details of LGO surplus qualified candidates are as follows.

The surplus qualified candidate Shri R.Veluswamy, Postman, 8376776 NK  who has been allotted to Krishnagiri Dn is serving in APS  is not included for inhouse training.

Divisional Heads/Unit Heads  concerned should immediately arrange  for  in-house    training for two weeks from 02/11/2015 before they are deputed for Induction training at PTC, Madurai which is to be commenced from 16/11/2015.

NFPE along with AIPEUGDS (NFPE) has taken decision to go on 48 hours strike on 1st & 2nd December, 2015 on the four point\s charter of demands.

NFPE had requested Secretary (P) in writing and by meeting personally to resolve the issues which are pending since long. But it is a very sorry state of affairs on the part of Department of Posts that neither any issue is settled nor even a single line in reply is being given.

As you all are  aware that NFPE along with PJCA had declared indefinite strike from 6th May-2015 onwards. On most of the items  Secretary (P)  gave positive  assurance in writing in the meetings  during negotiations on agenda of strike Charter of demands and the minutes were circulated among all and were published in all union journals. On 5th May Honourable Minister  Communication also called  meeting with both Secretary Generals NFPE & FNPO and  he also gave positive assurances including  GDS wage revision by 7th CPC and for Cadre restructuring he told  that  he has signed the file after approving the proposals and handed over to Secretary Post.

But after a lapse of 6 months period no progress is being noticed in any of the matter.

It was expected that Pay Commission will submit its report upto 30th September, 2015. Pay Commission requested to grant 2 months extension to bind up the office but the Government of India was very much generous to grant 4 months extension to Pay Commission. Pay Commission has completed its task but now Government is interfering and Secretary Finance Ministry has directed Pay Commission to give recommendations keeping in view the fiscal condition of the country and it should not give such recommendations which cannot be implemented. NJCA had deferred the decision of strike from 23rd November, 2015. We as NFPE told in the meeting of NJCA that we are going on indefinite strike in Postal. NJCA leadership requested to review  and reconsider  the decision and change the  date as NJCA has given call of a grand Dharna by All India  leaders of NJCA at Jantar Manter, New Delhi on 19 November,2015. Some of our Confederation leaders and senior leaders of NFPE also advised to review the decision. Accordingly NFPE Federal Secretariat meeting was held at Hyderabad on 11.10.2015 and reviewed the situation and unanimous decision was taken to organize 48 hours strike on 1st & 2nd December, 2015 on the following 4 points of Charter of demands:

(i) Include GDS in 7th CPC for wage revision and other service related matters.

(iv) Stop all types of harassment in the name of implementation of various     new      services and schemes and Trade Union Victimization.

BRIEF OF JUSTIFICATION OF DEMANDS

(i).   INCLUDE GDS IN 7TH CPC FOR WAGE REVISION AND OTHER SERVICE RELATED MATTERS.

Gramin Dak Sewaks constitute 50% of Work Force in Department of Post. They run 89% Post Offices in Rural Areas. Since 2nd Pay Commission, every  time a Committee headed by bureaucrats  has been constituted to look into the wage revision  and other service related matters  except at the time of Vth  Pay Commission when Justice  Talwar  Committee  was formed which gave  very favourable  recommendations to the GDS  but Government  did not implement 25% of its recommendations. This time NFPE raised the issue to include GDS in 7th CPC and this was supported by Confederation and National Council JCM. But Government has not given any attention towards this demand. During the negotiation on Strike  Charter of demands, Secretary (Post) assured to refer the matter  to Government  of India again third time  with strong recommendations  and  on 05.05.2015 , Hon`ble  Minister Communication had also assured to use his influence to get the GDS included in 7th CPC but nothing has been done so far. It is coming to the notice by some sources that Department of Post is going to form bureaucratic Committee again. We have requested several times that when Pay Commission complete its task than this matter should  also be given to him . Now Pay Commission has been allowed to sit idol for 3 months. This period might have been utilized for the wage revision of GDS. But Government of India is not at all concerned about this poor deprived and exploited section of working class. We cannot tolerate this state. So we have to go to agitation to fight this injustice and discrimination.

Cadre Restructuring proposals were finalized by the Committee 2 years before. On 5th May 2015 Minister also approved.  JS&FA also cleared the proposals. DOP&T has not raised any objection and suggested to take clearance from Finance Ministry. There is no more financial implications even that Finance Ministry has not cleared the proposal. We have asked Department of Post several times but nothing has been done so far. If it is not implemented before implementation of 7th CPC report. It will be of no use.

(iii).     FILL UP ALL VACANT POSTS IN ALL CADRES OF DEPARTMENT OF POSTS.

Though Recruitment is going on in the Department of Posts here and there. But there is acute shortage of staff in all cadres because recruitment is not being done as per actual sanctioned strength. If recruitment is made as per actual sanctioned strength and shortage is met out then 50%   problems will be solved automatically.
(iv).      STOP ALL TYPES OF HARASSMENT IN THE NAME OF IMPLEMENTATION OF VARIOUS         NEW SERVICES AND SCHEMES AND TRADE UNION VICTIMIZATION.

Our staff in all cadres is facing so much harassment and victimization. Every day any new service or scheme is being launched without proper infrastructure and sufficient man power. CBS and CSI biggest problem for P-III, 100% delivery for Postmen. Harassment of staff in RMS on OTA, More problems in Circle Office, Postal Accounts and Civil Wing and Electrical Wings are being faced due to staff shortage. If any Trade union leader raises his voice against these onslaughts, he is victimized. Holding of Melas and Meetings on every Sunday and Holiday has become the regular practice against the directions given by Secretary (Post).

So keeping in all these we have to fight against all these onslaughts and wrong policies of department of Posts and Government of India.

Whatever we have achieved that is due to struggle only. We have achieved so many things in past by struggles only. If we fight unitedly we will win sure.

For making the strike 100% successful please follow the following instructions:

1.         Campaign programme of All India leaders have been declared and published in websites, all circle secretaries of NFPE affiliated unions are requested to consult each other and make all arrangements for the meetings of All India leaders. If any change is needed, can be made with consultation of all.

2.         All India leaders should attend the programmes compulsorily.

4.         Strike notice will be served on 06.11.2015 to the Secretary (Posts) by NFPE leaders.It should be served at all levels by organizing mass demonstrations.

5.         Joint campaign programme should be conducted by all Circle/Divisional Secretaries in their respective Circles and Divisions and make maximum efforts for grand success of strike by organizing Gate meetings and General Body meetings. 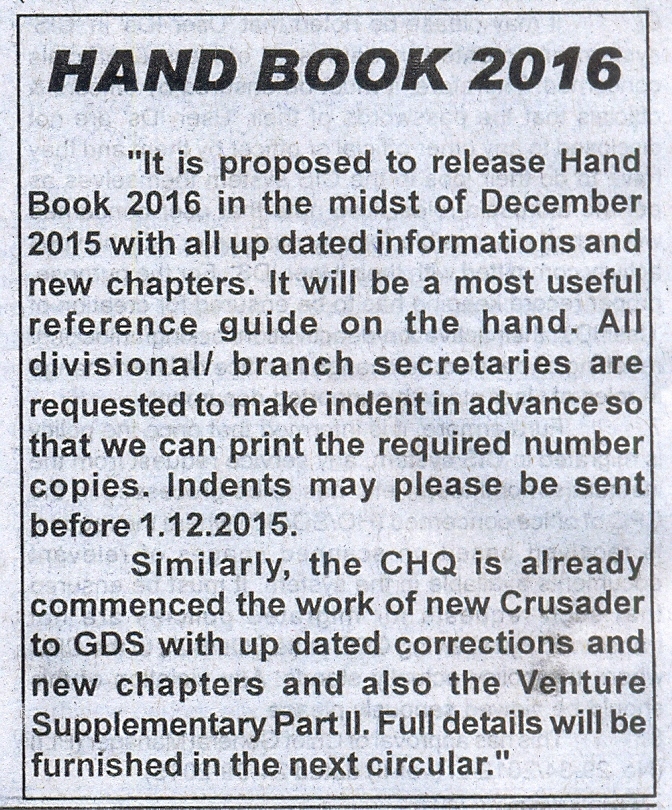 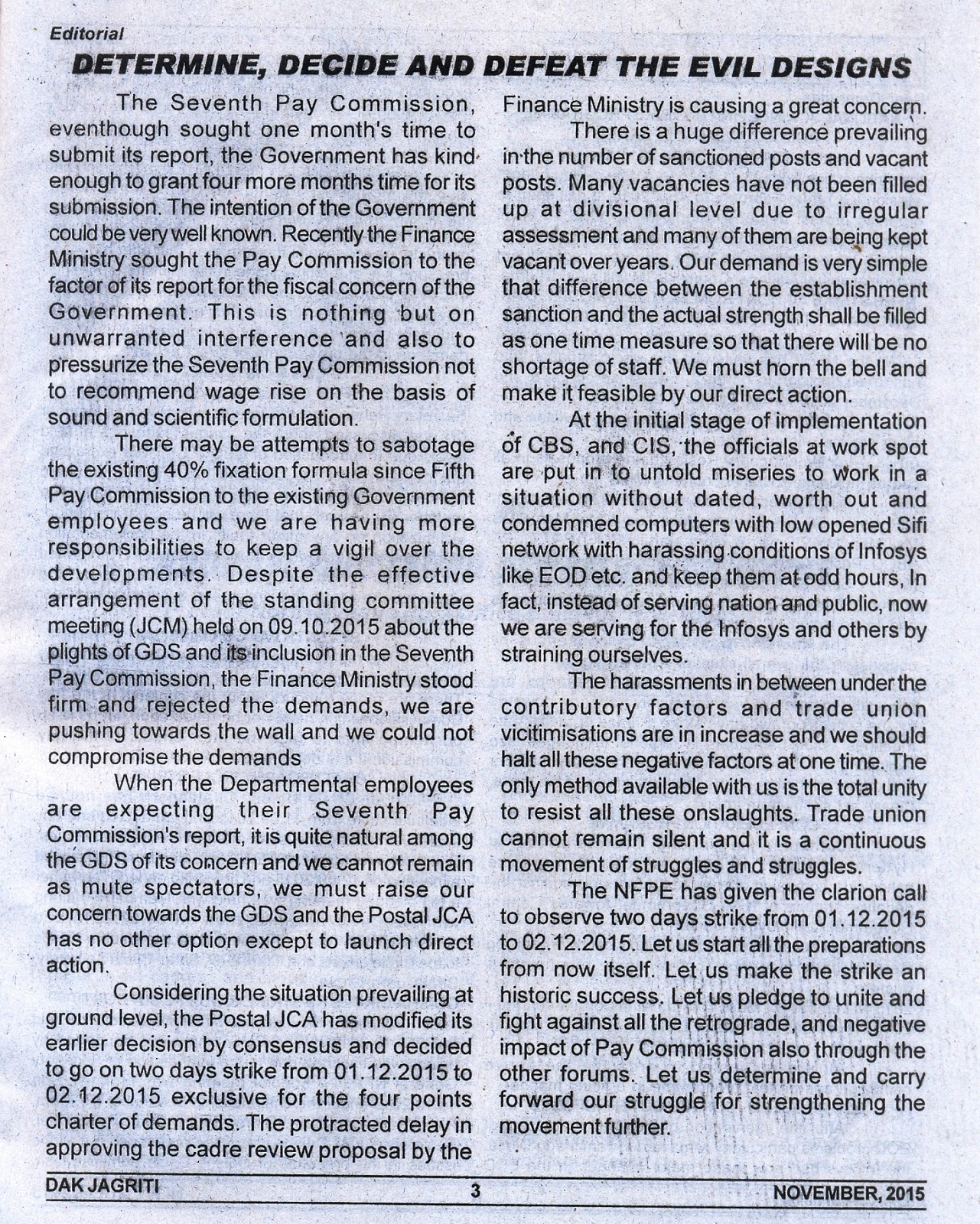 48 HOURS STRIKE ON 1st & 2nd DECEMBER-2015
7th Central Pay Commission has completed its task. The Report is ready and it was to be submitted by 30th September, 2015. Pay Commission requested to grant extension for two months to bind up the office but Government is very generous to grant extension for four months i.e. up to 31st December, 2015. National Joint Council of Action of National Council JCM constituent organizations took decision to defer the Indefinite Strike to be held from 23rd November-2015 as Pay Commission has not submitted its report. NFPE has taken decision earlier to go on indefinite strike from 23rd November-2015. But due to some technical reasons and in the wake of decision of NJCA, NFPE Federal Secretariat meeting held at  Hyderabad  on 11.10.2015 had reviewed  the entire situation  and came to the conclusion that 48 hours strike on 1st & 2nd December-2015  will be organized in the Department of Post on 4 Points Charter of  demands which include ,  Inclusion of GDS in 7th CPC , Implement cadre Restructuring proposals in all sections, filling  up of all vacant posts in all cadres  as per actual sanctioned strength and stopping up of  all types of harassments in the name of implementation of various  new services and schemes and Trade Union Victimization.

The Cadre restructuring proposals in all Cadres including Postal Accounts and MMS were finalized about 2 years ago but still these are not implemented. If this could not be implemented before the implementation of  report of 7th CPC , it will be of no use.

Postal staff in each cadre is facing lot of hardship due to acute shortage of staff, because the recruitment is not being done on the basis of actual sanctioned strength. If staff shortage is met out more than 50% problems will be solved automatically.

One of the most burning problems is the harassment of staff in all cadres in the name of implementation of various schemes and services and trade union victimization. CBS and CSI has become a very serious problem. Without developing proper infrastructure these schemes are being implemented and staff is facing more difficulties and harassment from administration as well as public. More and more staff is being made victim under contributory negligence factor. If any union representative raises his voice against all these excesses he is victimized.

This state of affairs on the part of administration cannot be tolerated more.
Therefore the Federal Secretariat of NFPE has decided unanimously to go on 48 hours Strike on 1st and 2nd December-2015.

NFPE call upon the entirety of Postal, RMS and GDS employees to make all efforts to  make the 48 hours strike a historic success and make the department  and Government  of India  to understand  that Postal Employees  will not leave  their genuine  demands and will always remain on the path of struggle.

Unitedly we fight we will win. We have won on so many occasions and this time also we will win.

UNITY FOR STRUGGLE AND STRUGGLE FOR UNITY.

Government to issue Sovereign Gold Bonds with effect from 26th November, 2015; Bonds to be sold through banks and designated post offices

Government of India, in consultation with Reserve Bank of India (RBI), has decided to issue Sovereign Gold Bonds. The Bonds will be issued on November 26, 2015. Applications for the bond will be accepted from November 05, 2015 to November 20, 2015. The Bonds will be sold through banks and designated post offices as may be notified. The borrowing through issuance of the Bond will form part of market borrowing programme of Government of India.

It may be recalled that the Finance Minister had announced in Union Budget 2015-16 about developing a financial asset, Sovereign Gold Bond, as an alternative to purchasing metal gold.

The major features of the Bond are given below: