On 30-07-2010,Supreme Court delivered a Historical judgement to absorb RRR Candidates of Tamilnadu Circle, with past service benefits including  old pension scheme.
The Decade old legal battle come to an fair end. AIPEU Gr "C" Tamilnadu Circle congratulates the leading Cadres of the RRR Candidates who had carried forward this sustained and consistent struggle to the victory ground..
J.Ramamurthy
Circle secretary 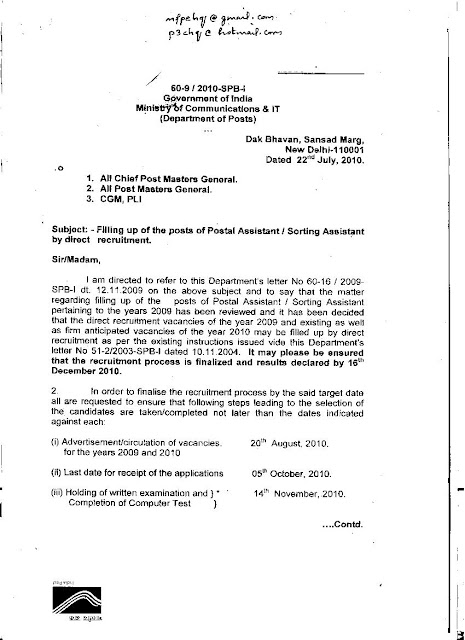 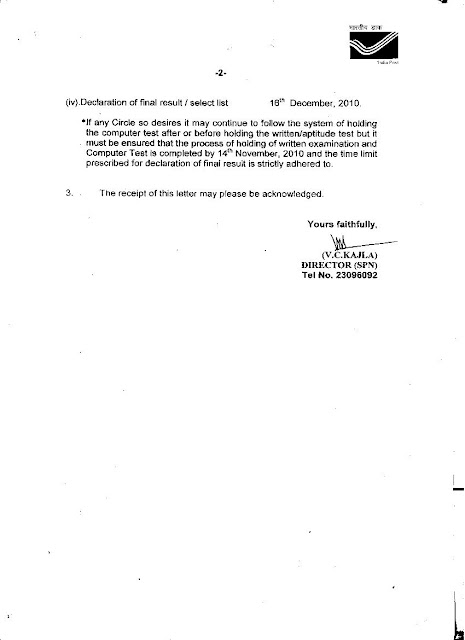 Now Directorate issued Due to the hectic efforts of our General Secretary  a new Division is formed in the name of Krishnagiri Division bifurcating Dharmapuri Division and without any downgradation / merger of Salem East/West as originally proposed by our department.  Thanks to Com. KVS.
J.Ramamurthy
Circle Secretary

1. Click below link to get IP review Results for the year 2007

2.Click below link to get the Marks of the candidates Circle wise.
http://docs.google.com/fileview?id=0B1lMxUW4u8zyODI3Yzg5NmUtN2Q3Ni00Y2ExLThhN2EtMGQzMGZiMTJhNDZj&hl=en

Meeting was held under the chairpersonship of Secretary (P), in which the following were present:

1. There will be no closure of single handed post offices.

2. The demand of the staff side that the annual increments to the erstwhile GDS SPMs should be continued will be considered positively.

3. There is no policy decision of the department to outsource any of the postal services.

4. A separate meeting will be held on 15.07.2010 to discuss about the Mckinsey and the object of restructuring the services.

5. Another separate meeting with the staff side will be held about the technology proposals shortly to discuss the future expansion of technology.

6. There will be no violation of earlier agreement on status quo of RMS & MMS with 10000 mails. Any violation if brought to the Directorate’s notice it will be set aside.

7. The Departmental council & periodical meetings will be held regularly hereafter. Next meeting will be held in next month August 2010.

8. The demand of higher pay to TBOP &BCR for the earlier period will be considered along with the cadre review proposals.

9. There will be no harassment in Project Arrow offices. Furnishing wrong data’s and showing as delivered or redirected will not be allowed hereafter.

10. The demand of the staff side to assess the vacancies as per establishment strength and actual strength in all cadres will be considered and all Chief PMGs will be addressed and appraised to fill up all the vacant posts forthwith during video conferences personally by the Secretary (P).

11. A committee consisting four staff side representatives with DDG(P) & DDG (Est) will be constituted and the process of the proposals of cadre review for all cadres will be completed before the end of 2010.

12. Separate discussions will be made on the proposal of creation of Postmasters cadre also.

13. The welfare schemes to GDS like grant of pension, medical, the proposals were already cleared by the Postal Board and submitted to nodal ministries for approval. It will be expedited.

14. It was assured to reconsider the norms for cash handling to BPMs and also fix fresh norms to RPLI and NREGIS scheme shortly.

15. The proposal for higher pay to Driver with Grade pay of 2400 has been sent to the Ministry of Finance.

16. The revision of O.S.A rates will be made within one month.

17. Technology training to workshop staff will be provided.

18. The proposals for the grant of minimum pay as per the Sixth CPC to casual labourers have been submitted to Ministry of Finance for approval. It will be expedited. The demand of the staff side to grant revised GDS pay to GDS substitutes will be considered.

19. The issues related to postmen norms, delivery, beat etc will be discussed shortly and final decision will be taken before the end of October 2010. One committee will be constituted to sort out the issues.

20. The plea of the staff side to ignore benchmark for MACP has been accepted and the Secretary told the DDG to cause orders today itself. Another request to ignore the earlier declining of LSG promotions prior to the receipt of MACP orders will also be considered.

22. The Recruitment Rules for Multi tasked staff will be finalized shortly. Our request to finalise the rules with no educational qualifications as if available to erstwhile Group D has been accepted.

23 The issues relating to Postal accounts like filling up of posts, amalgamation of Group C etc will be discussed further with DDG (PAF).

24. The suggestions of the Admin union about centralization of PLI claim at RO & CO will be considered. Further a separate meeting will be organized with their union to discuss about their issues.

25. Clarificatory orders will be issued soon providing officiating pay to the officials holding higher posts like HSG II & HSG I.

26. The issues of the postal Civil wing will be discussed separately.

After the meeting, the JCA met and decided to defer the proposed strike duly considering the positive approach of the Secretary in settlement of our genuine demands.

Fwd: DATE OF NEXT INCREMENT IN EXTRA ORDINARY LEAVE CASES

One of the major demand from Staff side JCM in National Council, now the demand has been granted by the Government and published as order.

No. 16/2/2009-Estt.(Pay I)
Government of India
Ministry of Personnel Public Grievances & Pensions
Department of Personnel & Training

New Delhi, the 2nd July 2010
OFFICE MEMORANDUM
Subject: Regulation of the Date of Next Increment in case of Extra-Ordinary leave (without medical certificate) after implementation of the CCS(RP) Rules, 2008 – clarification regarding.

Consequent upon the implementation of CCS(RP) Rules 2008, the increments in the revised pay structure are to be regulated in terms of Rule 10 of the CCS (RP) Rules 2008.This rule states that 'there will be a uniform date of annual increment viz. 1st of July every year. Employees completing 6 months and above in the revised pay structure as on 1st July will be eligible to be granted the increment."

2.       The issue of regulation of date of next increment in case of EOL (without medical certificate) after implementation of CCS(RP) Rules 2008, has been examined in consultation with the Department of Expenditure.

3.       It is clarified that except as provided under the conditions laid down in this Department's OM dated 18.2.1986, qualifying service of less than six months on account of EOL (without medical certificate) between 1st July of the previous year till 30th June of the year under consideration shall have the effect of postponing the increment to 1st July of the next year. The same stipulation will also be applicable to those cases where the increment became due on 1.7.2006. In terms of this Department's O.M. No. 13017/20/85-Estt. (L) dated 18.2.1986, EOL granted for the following purposes automatically counts as qualifying service for pension and for increments without any further sanctions:-

(i) EOL granted due to inability of a Government servant to join or rejoin duty on account of civil commotion.