THE FOLLOWING CASES HAVE BEEN DISCUSSED WITH DPS THIS EVENING AND THE OUTCOME OF THE DXISCUSSIONS FURNISHED BELOW.

AICPIN for the month of March 2012

All-India Consumer Price Index Numbers for Industrial Workers on Base 2001=100 for the Month of March 2012.

The following are the broad understandings reached in the Committee meeting.

The present Post Masters in 3732 triple handed post offices and also the present LSG to the extent of 6989 will be upgraded to the status of HSG II.

The present HSG II and HSG I posts to the extent of 3352 Posts will be amalagamated.

A separate identification to the extent of 30% of HSG I posts as non functional Group ‘B’ posts with grade pay of Rs. 4800/- will be formed.

1/3rd of the total LSG, HSG II, HSG I will be carved out as Postmaster Grade-I, Grade-II, and Grade-III respectively.

The posts of System Administrators will be made as LSG vice versa.

PO & RMS Accountant will be made as a separate channel
of promotion by reidentifying the Posts of LSG, HSG-II and
HSG I posts.

The RMS, Circle office and SBCO staff will be considered as per the ratio finalised in respect of Postal Assistant cadre.

The Official side accepted the above proposal and assured to consider the above and come out with the final decision shortly. As requested by them a common proposal of the Staff side has been submitted to day itself.

Since the MTS is the common category for all Central Govt. employees, there
is no possibility of bringing them under cadre review.

As functional Justification could not be identified for the Postman and also the  higher pay granted by the 6th CPC, the official side did not favour any cadre review. However official side came forward with the proposal if the Postman cadre opts out from the MACP scheme and agree to take the percentage wise promotions it will be considered. It requires a deep study and the Postman unions will discuss the issue and come out with the proposals.

The Federal secretariat endorsed the decision of the Confederation National Executive to organize March to Parliament on 26.7.2012 and one day token strike thereafter.

The Federal Secretariat has fixed the quota target of participation in receipt of our union to the extent of 2000.

All Circle Secretaries are requested to organise the comrades in large numbers.

All Circle Secretaries and Divisional Secretaries are requested to book their Journey tickets in advance so as to reach on 26.7.2012 for particiting the rally. NFPE has organized an All India convention on the same day at Delhi on 26.07.2012. Similarly the AIPEU GDS (NFPE) has organized a Massive Dharna before the Parliament demanding departmentalization of GDS on 27.7.2012. The comrades of Delhi Circle desire to arrange a felicitation function to Com. K. V. Sridharan, General Secretary on the eve of his superannuation on 27.07.2012 evening at Delhi. The comrades who desire to participate both the programmes may book the return tickets accordingly.

The Federal Secretariat held on 21.5.2012 has accorded the status of associate membership to newly formed AIPEU GDS (NFPE). The General Secretary has also requested all the Divisional Secretaries/Circle Secretaries seeking their co-operation in formation of branches at all levels.

Since the fresh verification of membership in GDS cadre is offing and notification for that effect may be issued at any time. It is realiably learnt that the recognition to the office bearers has not been accorded to the AIPEDE union due to the vertical split in the All India Conference and there is every possibility of another Membership verification at any time. It is our prime need to strengthen the organisation which is associated with NFPE and declared to work under the guidance of P3 leadership right from Divisions to All India level.

All Divisional/Circle Secretaries are requested once again to extend full cooperation and unstinted support to the newly formed AIPEU GDS (NFPE).

STATION TENURE NOT FOR P.A.s/S.A.s- WE GOT THE ORDERS

CLARIFICATION NOW ISSUED  ON R.T. GUIDELINES  - WE HAVE DEMANDED-ORDERS NOW ISSUED BY THE DEPARTMENT -  IT IS OUR  VICTORY. 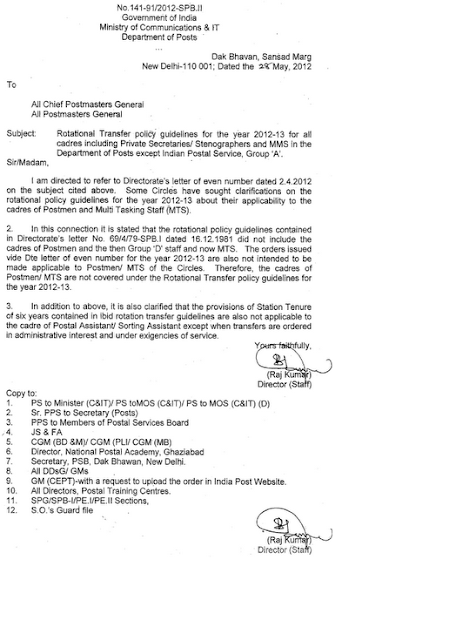 OUR STRIKE DEMAND- A GREAT VICTORY- ARREARS PYT TO GDS SUBSTITUTES FROM 01.01.2006

A GREAT VICTORY -  WE HAVE ACHIEVED  A GREAT THING -  IT IS OUR STRIKE DEMAND - IT IS ALREADY AGREED TO CONSIDER BY THE DEPARTMENT  IN THE MINUTES -NOW ORDERS ISSUED.

ARREARS TO GDS SUBSTITUTES ORDERED W.E.F. 01.01.2006. PLEASE  TELL  ALL OUR  GDS EMPLOYEES AND THEIR SUBSTITUTES. 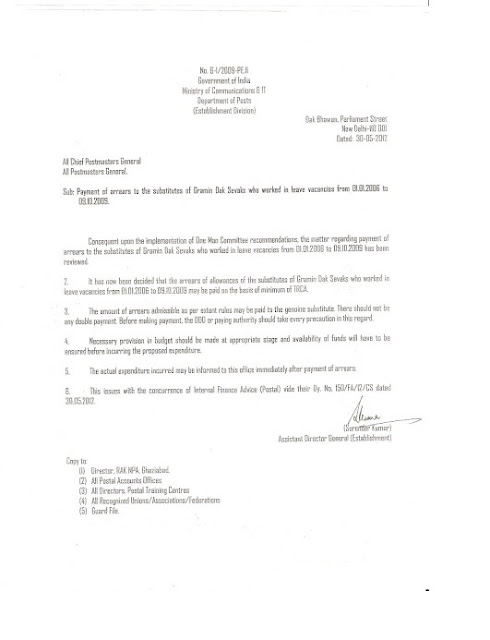