UNION CABINET FINALISED THE TERMS OF REFERENCE OF 7TH CPC

The Union Cabinet today gave its approval to the Terms of Reference of 7th Central Pay Commission (CPC) as follows:-

a)      To examine, review, evolve and recommend changes that are desirable and feasible regarding the principles that should govern the emoluments structure including pay, allowances and other facilities/benefits, in cash or kind, having regard to rationalization and simplification therein as well as the specialized needs of various Departments, agencies and services, in respect of the following categories of employees:-

b)      To examine, review, evolve and recommend changes that are desirable and feasible regarding principles that should govern the emoluments structure, concessions and facilities/benefits, in cash or kind, as well as retirement benefits of personnel belonging to the Defence Forces, having regard to historical and traditional parities, with due emphasis on aspects unique to these personnel.

c)      To work out the framework for an emoluments structure linked with the need to attract the most suitable talent to Government service, promote efficiency, accountability and responsibility in the work culture, and foster excellence in the public governance system to respond to complex challenges of modern administration and rapid political, social, economic and technological changes, with due regard to expectations of stakeholders, and to recommend appropriate training and capacity building through a competency based framework.

d)     To examine the existing schemes of payment of bonus, keeping in view, among other things, its bearing upon performance and productivity and make recommendations on the general principles, financial parameters and conditions for an appropriate incentive scheme to reward excellence in productivity, performance and integrity.

e)      To review the variety of existing allowances presently available to employees in addition to pay and suggest their rationalization and simplification, with a view to ensuring that the pay structure is so designed as to take these into account.

f)       To examine the principles which should govern the structure of pension and other retirement benefits, including revision of pension in the case of employees who have retired prior to the date of effect of these recommendations, keeping in view that retirement benefits of all Central Government employees appointed on and after 01.01.2004 are covered by the New Pension Scheme (NPS).

g)      To make recommendations on the above, keeping in view:

i.          the economic conditions in the country  and need for fiscal prudence;
ii.         the need to ensure that adequate resources are available for developmental expenditures and welfare measures;
iii.        the likely impact of the recommendations on the finances of the State Governments, which usually adopt the recommendations with some modifications;
iv.        the prevailing emolument structure and retirement benefits available to employees of Central Public Sector Undertakings; and
v.          the best global practices and their adaptability and relevance in Indian conditions.

h)      To recommend the date of effect of its recommendations on all the above.

The Commission will make its recommendations within 18 months of the date of its constitution.  It may consider, if necessary, sending interim reports on any of the matters as and when the recommendations are finalised.

The decision will result in the benefit of improved pay and allowances as well as rationalization of the pay structure in case of Central Government employees and other employees included in the scope of the 7th Central Pay Commission.

Central Pay Commissions are periodically constituted to go into various issues of emoluments’ structure, retirement benefits and other service conditions of Central Government employees and to make recommendations on the changes required.

The statements of Confederation, CHQ and NFPE, CHQ will be published shortly after collecting full details.

The Union Cabinet today approved to increase in  Dearness Allowance by 10% to Central Government employees.

The rate of Dearness allowance shall be enhanced from the 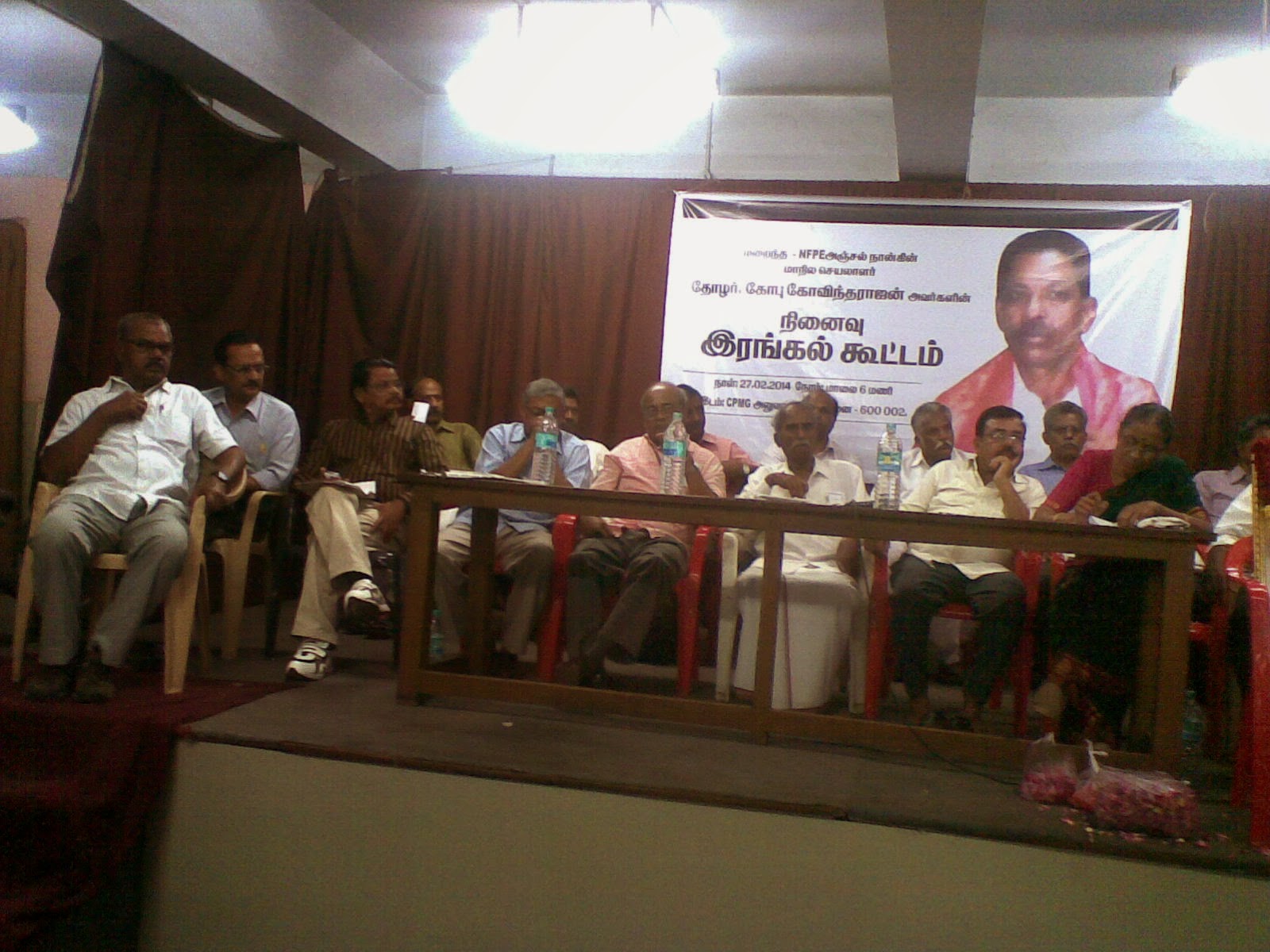 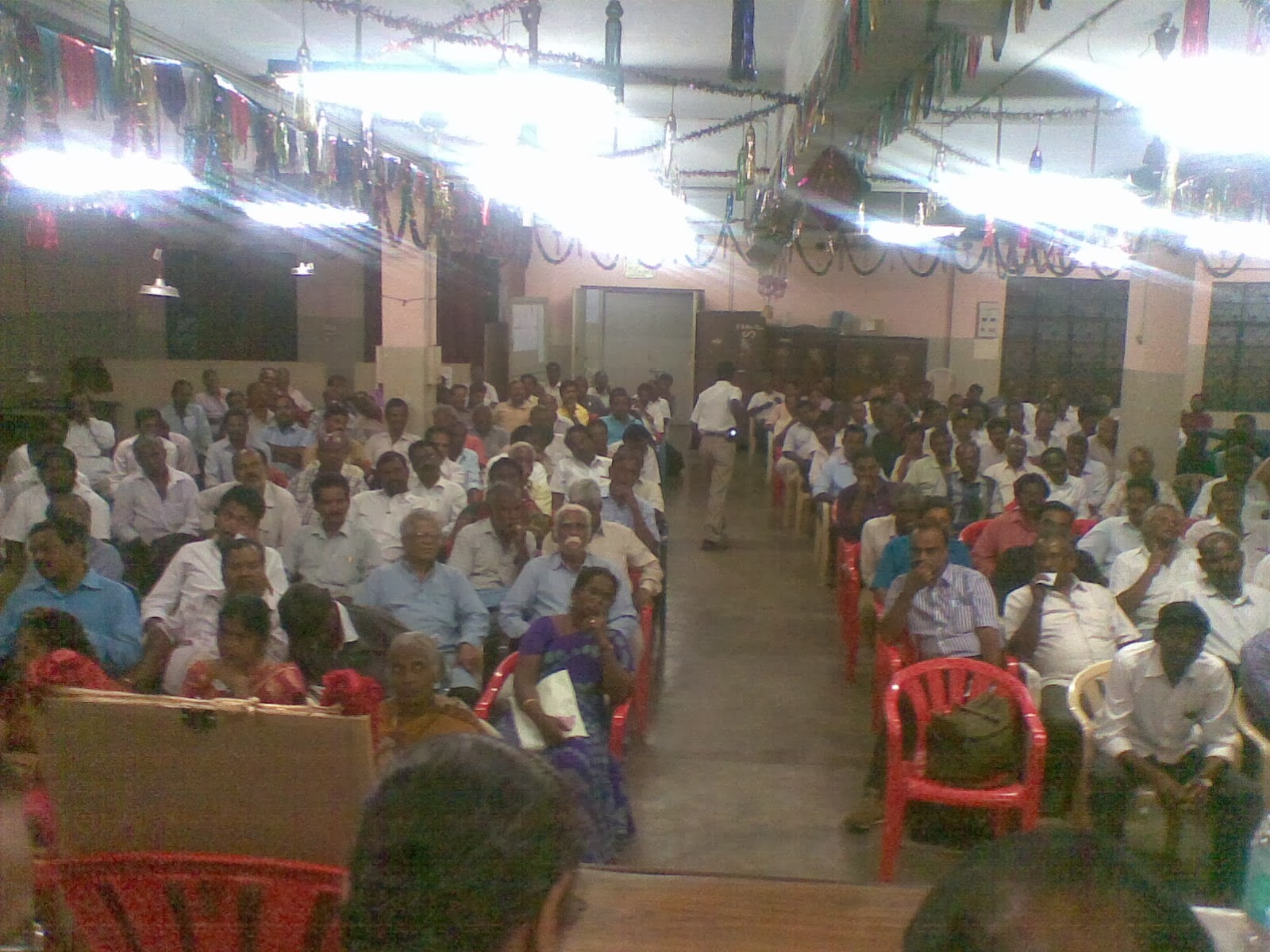 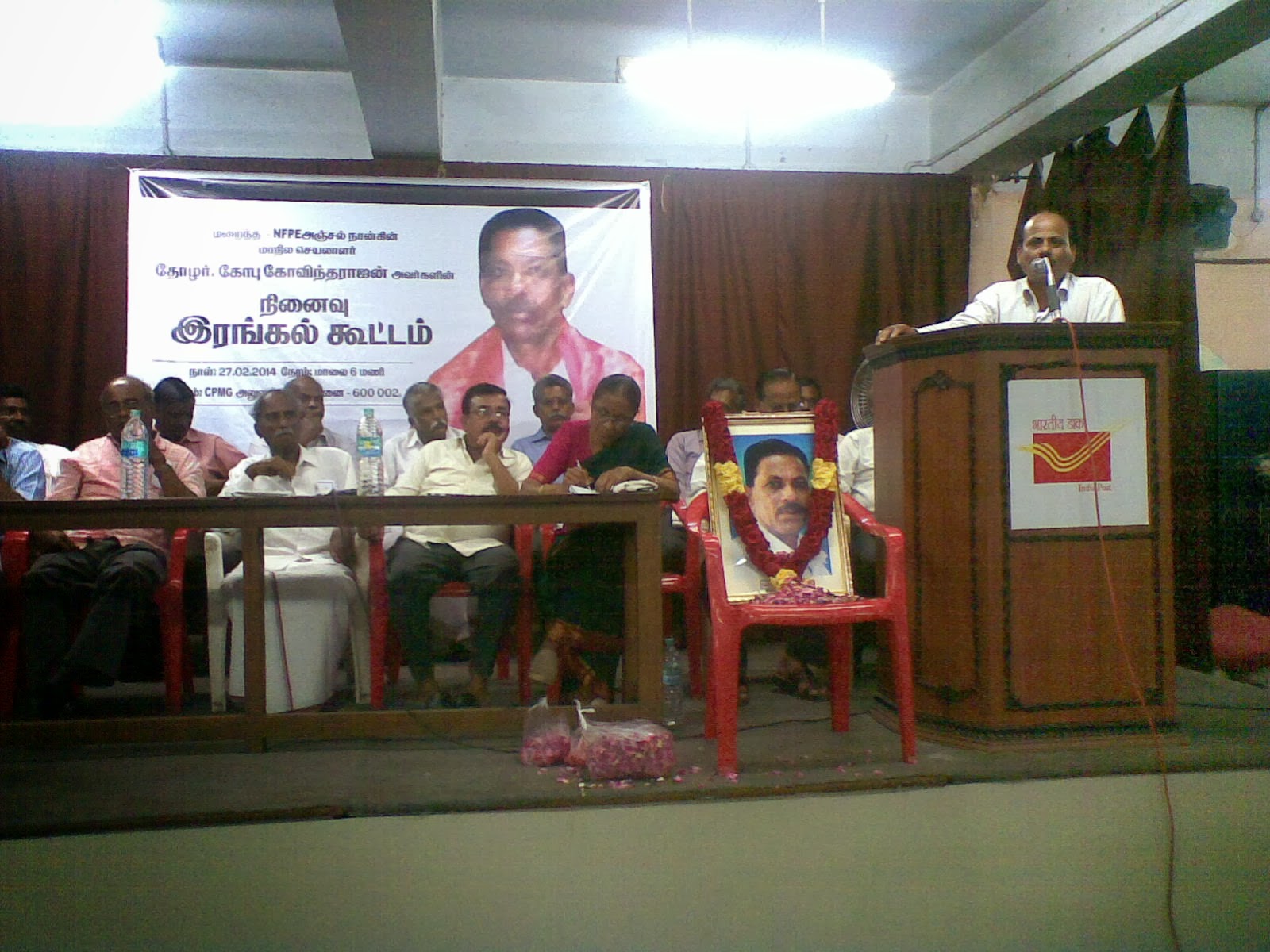 New Delhi:   The Union Cabinet on Friday will decide on a series of populist measures and some ordinances on anti-graft and protection of rights bills at a meeting possibly the last before the model code of conduct could come into force for coming Lok Sabha polls.

A proposal to increase the poll expenditure cap up to Rs 70 lakh per contestant from Rs 40 lakh now is also on the table of the cabinet meeting.

The cabinet will also decide on hiking dearness allowance to 100 per cent from existing 90 per cent, benefiting 50 lakh employees and 30 lakh pensioners.

The hike in DA would be effective from January 1 this year. Another proposal which will bring cheers to pensioners is to ensure Rs 1,000 minimum monthly pension under the pension scheme run by retirement fund body EPFO, which would immediately benefit 28 lakh pensioners.

The cabinet is likely to consider a clarification on the decision for supply of 12 subsidised LPG cylinders per household in a year.

The government had last month raised the cap on supply of cheaper LPG from 9 to 12 cylinders of 14.2-kg each. It was inferred that this meant one cylinder in a month.

The ministry has proposed to the cabinet that consumers should have the freedom to book a refill after 21 days with an overall cap of 12 subsidised bottles in a year.

When the model code of conduct goes into force with the announcement of the election schedule, no populist measure can be made public and any policy decision can be announced only with the clearance of the Election Commission.

Sources said the cabinet may also consider raising the retirement age of government employees from 60 to 62 years. The raising of superannuation age was originally a part of the Terms of Reference of the Seventh Pay Commission.

Since the Commission report is expected not before 2017, a decision on raising the retirement age cannot happen before that.

So, the reference to retirement age has been removed from the ToR of the 7th Pay Commission and it is speculated that the same may be brought as a supplementary agenda.

Sources have not ruled out a proposal before the cabinet to provide 'special category' status to Andhra Pradesh for development of Seemandhra region on the ground of revenue loss following the bifurcation.

The cabinet could also approve six ordinances on bills pending in Parliament. Three ordinances which had lapsed last month could also be re-promulgated.

Three anti-corruption bills -- Prevention of Corruption (Amendment) Bill, Right of Citizens for Time-Bound Delivery of Goods and Services and Redressal of their Grievances Bill and the Public Procurement Bill -- are likely to be approved as ordinances.

Along with these, the SC/ST (Prevention of Atrocities) Amendment Bill, Rights of Persons with Disability Bill, Security Laws (Amendment) Bill, ordinances on Medical Council of India and another which gives Election Commission limited powers to make changes in Scheduled Caste and Scheduled Tribe constituencies, where some castes have been either excluded or included between the 2001 census and May 2012, are also likely to be approved by the cabinet.

An ordinance seeking to enhance the pecuniary jurisdiction of civil suits of the Delhi High Court from existing Rs 20 lakh to Rs 2 crore will also come up.

The Delhi High Court (Amendment) Bill, 2014, introduced in the Rajya Sabha recently, aims at reducing workload of the Delhi High Court by transferring thousands of civil suits, valued up to Rs 2 crore, to the nine district courts in Delhi.

In order to meet the requirements and needs of the I.T modernization project, Infosys Core banking Solution (CBS) will be implemented across India covering all the Post offices.

Core Banking Solution (CBS) - FINACLE is networking all the Post offices which enable customers to operate their accounts and avail Account related services from any Post offices on CBS network regardless of where he/she maintains his/her account. The customer is no more the customer of a particular Post office. He becomes the Post office Savings Bank (POSB) customer. Thus CBS is a step towards enhancing customer convenience through “Anywhere and Anytime Banking”. As Finacle is integrated to all the banks in course of time, the customer can access any bank account through post office.

Around Rs.700 crore is earmarked for this Project. Core Banking Solution(CBS) for Post office Savings Bank is being implemented throughout India. As on date, 57 Head Post offices and 11 Sub Post offices have migrated covering 64 lakh accounts.  By 31.03.2014, 700 more Post offices will be covered. All the 26,840 Post offices would be functional in CBS by 2016. 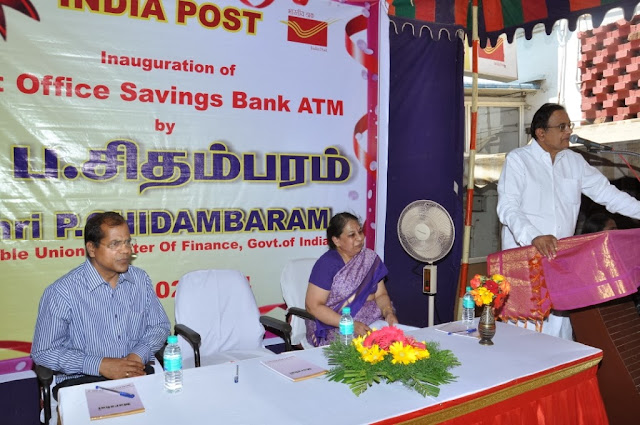 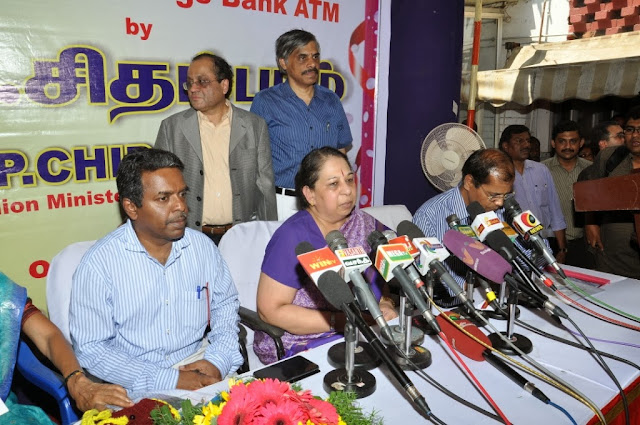 M. KRISHNAN,
SECRETARY GENERAL;
FOR AND ON BEHALF OF THE NATIONAL SECRETARIAT OF THE CONFEDERATION OF CENTRAL GOVERNMENT EMPLOYEES AND WORKERS.
DATED; 28TH FEBRUARY, 2014.

TOTAL VACANCIES OF Postal Assistant & Sorting Assistants IN ALL 22 CIRCLES 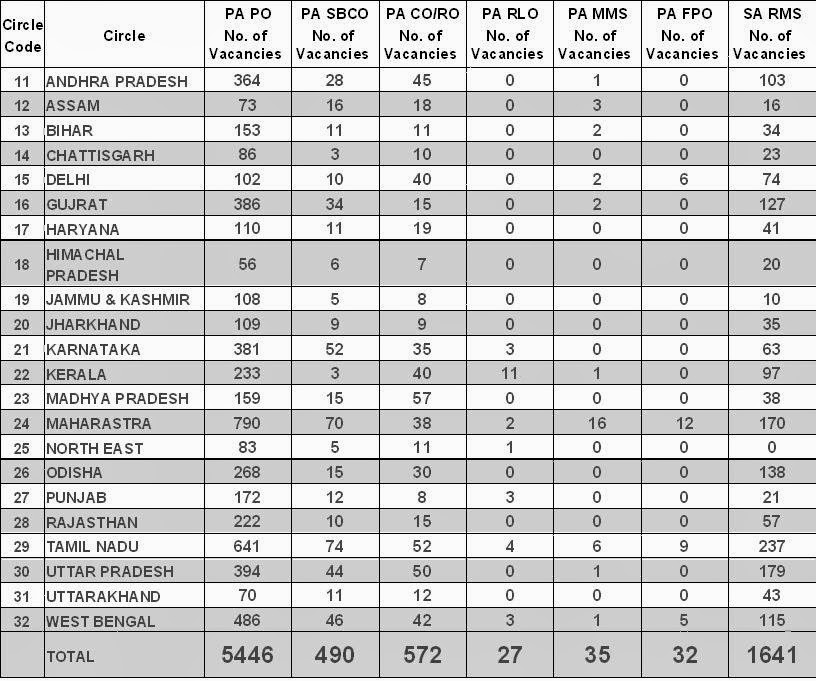 EXAMINATION FOR RESIDUAL VACANCIES OF 2012 ANNOUNCED ( GDS TO P.A./S.A.)

The following is the time schedule for the above examination.

The time schedule may be strictly followed.  The instructions issued regarding scrutiny of applications and dispatch by the Divisions/Regions should also be scrupulously followed.

Please acknowledge the receipt of the letter.