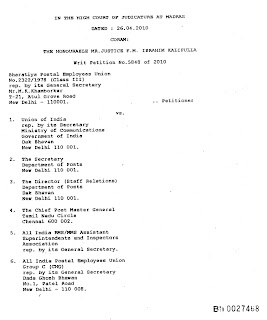 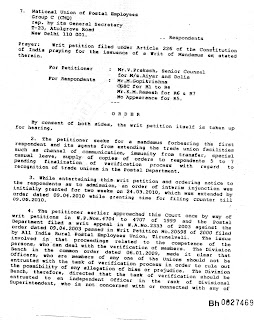 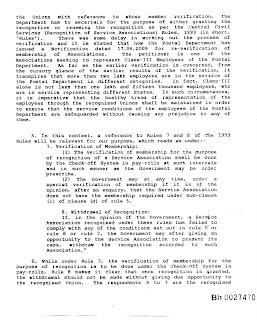 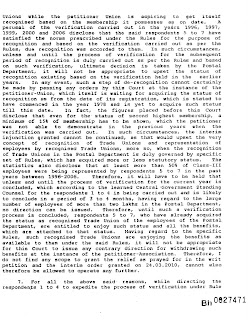 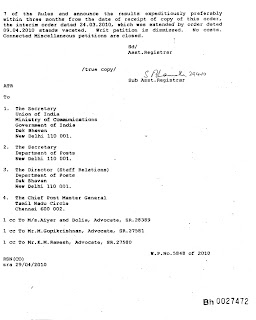 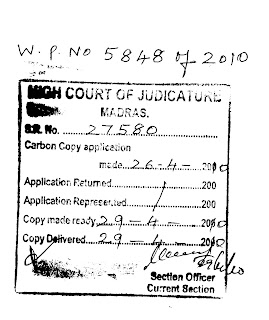 HERE IS A NEWS FLASH - THE WRIT PETITION FILED BY BPEF UNION IN MADRAS HIGH COURT AGAINST THE TRADE UNION FACILITY OF P3 UNIONS OF NFPE & FNPO AND IRM&ASRM UNION STANDS DISMISSED TODAY
Dear Comrades,
HAIL THIS LEGAL VICTORY
As already intimated by our websites, the Writ Petition filed by the BPEF Union in the Hon'ble High Court of Madras came up for hearing today. The Interim injunction granted to the trade union facilities of P3 NFPE Union and FNPO Union was opposed by our Advocate. The Government Advocate also presented the case of the Government side. On hearing the arguments of our Advocate, the Honourable Judge dismissed the WRIT PETITION filed by the BPEF Union and ordered immedieate restoration of trade union facilities to P3 Unions of NFPE and FNPO and also the IRM&ASRM Union which was cancelled based on the Interim Injunction granted by the Hon'ble Madras High Court recently.
In addition the Honourable Judge ordered that whole process of Re-verification has to be concluded within a period of three months - This means there is no stay to the ongoing process of Re-verification and the process will continue as usual.
NFPE hails this legal victory as the 'victory of the Postal Employees' who have always stood for honest trade unionism and opposed all types of machinations to scuttle the recognition of historic Federation and its Affiliated Unions and Associations. This legal victory should be a lesson to all forces who feel happy to see the trade union facilities temporarily withdrawn by the Administration on the face of Interim Injunction. Such types of joy aimed against our movement will only be short-liven as in the present case.
With this restoration of trade union facilitiy and the direction of the Honourable Court for completion of Re-verification process, NFPE calls upon all the Divisional and Branch Secretaries to complete the process of submission of Declaration Forms with 5 lists with their signature at the bottom of each page today itself - Remember today [26.04.2010] is the last day of submission to the Divisional Heads.
CELEBRATE THIS LEGAL VICTORY - ENSURE OUR ORGANISATIONAL VICTORY WITH YOUR MAXIMUM SUBMISSION OF MEMBERSHIP FORMS TODAY ITSELF.

NO. 21011/1/2010-Estt.A
Government of lndia
Ministry of Personnel, Public Grievances & Pensions
Department of Personnel & Training
*****
North Block, New Delhi
Dated the 13th April, 2010
OFFICE MEMORANDUM
Subject: Below Benchmark gradings in ACRs prior to the reporting period 2008-09 and objective consideration of representation by the competent authority against remarks in the APAR or for upgradatin of the final grading.
The undersigned is directed to say that prior to the reporting period 2008-09, only the adverse remarks in the ACRs had to be communicated to the concerned officer for representation, if any to be considered by the competent authority. The question of treating the grading in the ACR which is below the benchmark for next promotion has been considered in this Deparment and it has been decided that if an employee is to be considered for promotion in a future DPC and his ACRs prior to the period 2008-09 which would be reckonable for assessment of his fitness in such future DPCs contain final grading which are below the benchmark for his next promotion, before such ACRs are placed before the DPC,the concemed employee will be given a copy of the relevant ACR for his representation, if any, within 15 days of such communication. It may be noted that only below benchmark ACR for the period relevant to promotion need be sent. There is no need to send below benchmark ACRs of other years.
2. As per existing instructions, representations against the remarks or for upgradation of !he final grading given in the APAR (previously known as ACR) should be examined by the competent authority in consultation, if necessary, with the Reporting and the Reviewing Officer, if any. While considering the representation, the competent authority decides the matter objectively in a quasi-judicial manner on the basis of material placed before it. This would imply that the competent authority shall take into account the contentions of the officer who has represented against the particular remarks/grading in the APAR and the views of the Reporting and Reviewing officer if they are still in service on the points raised in the representation vis-a-vis the remarks/gradings given bv them in the APAR. The UPSC has informed this Departrnent that the Commission has observed that while deciding such representations, the competent authorities sometimes do not take into account the views of Reporting/Reviewing Officers if thev are still in service. The Commission has further observed that in majority of such cases, the competent authority does not give specific reasons for upgrading the below benchmark ACR/APAR gradings at par with the benchmark for next promotion.
3.All Ministries/Departments are therefore requested to inform the competent authorities while forwarding such cases to them to decide on the representations against the remarks or for upgradation of the grading in the APAR that the decision on the representation may be taken objectively after taking into account the views of the concerned Reporting/Reviewing Officers if they are still in service' and in case of upgradation of the final grading given in the APAR, specific reasons therefor may also be given in the order of the competent authority.
(CA. Subramanian)
Director

Copy of the original orders of the Department is available hereunder: No.14-5/2009-PAP 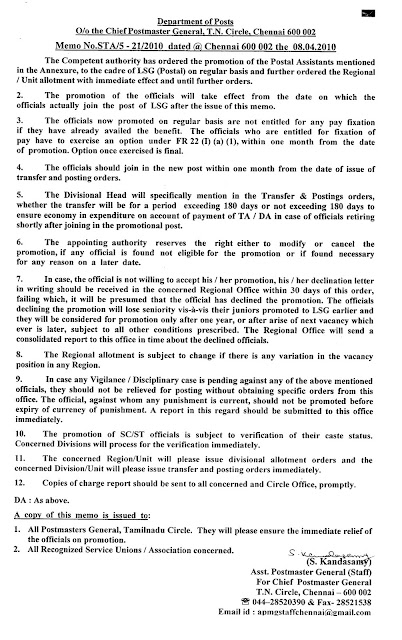 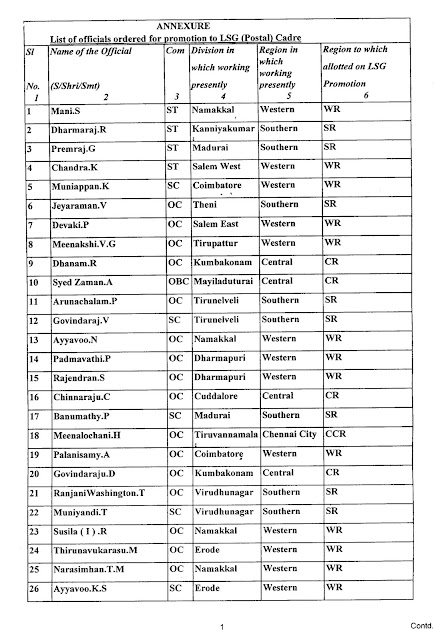 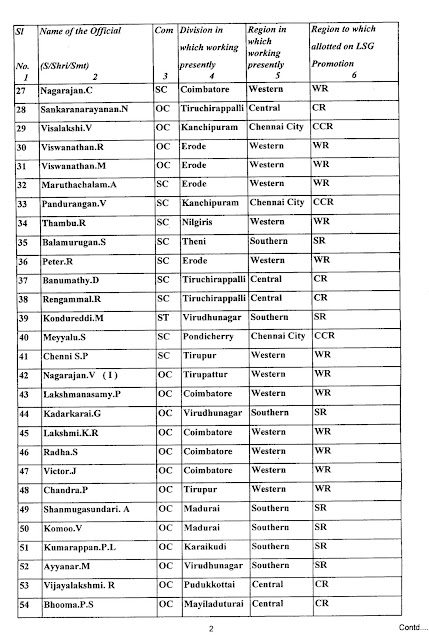 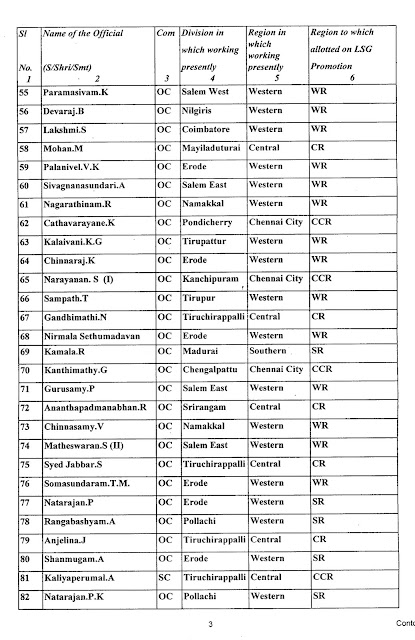 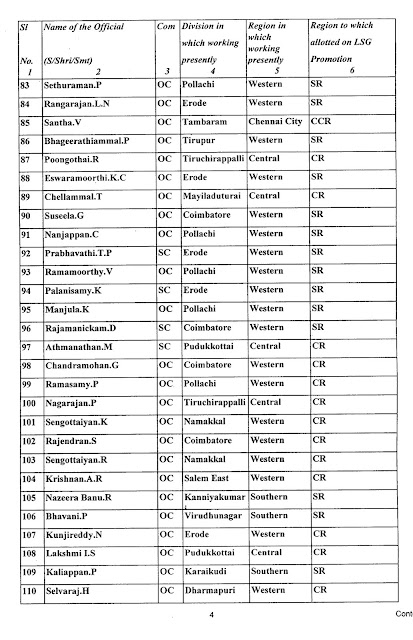 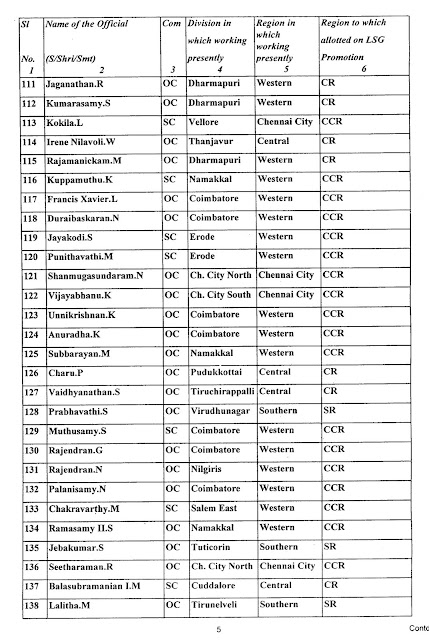 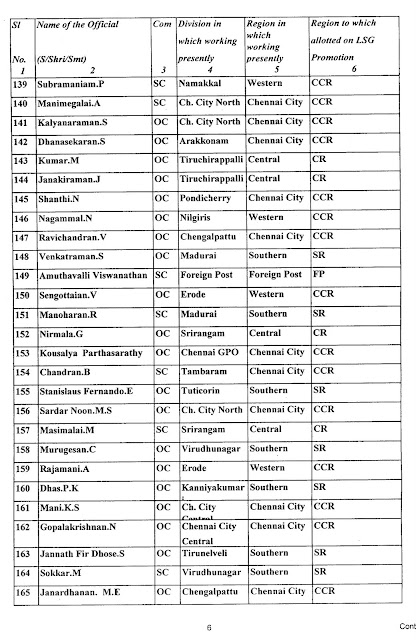 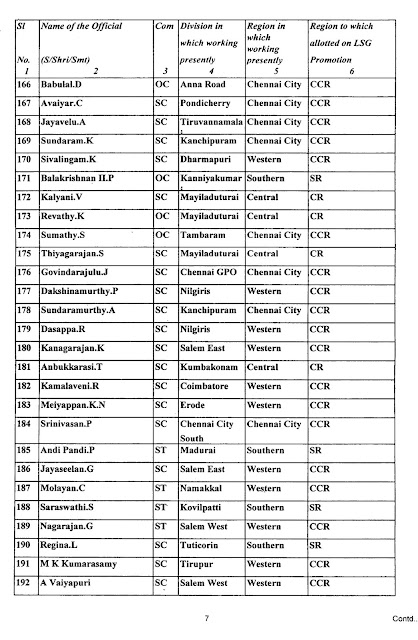 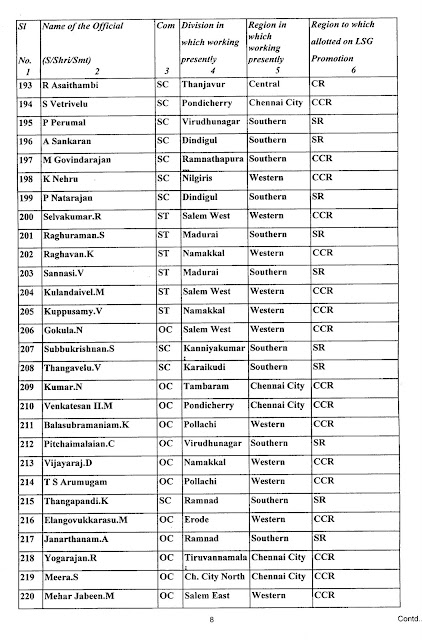 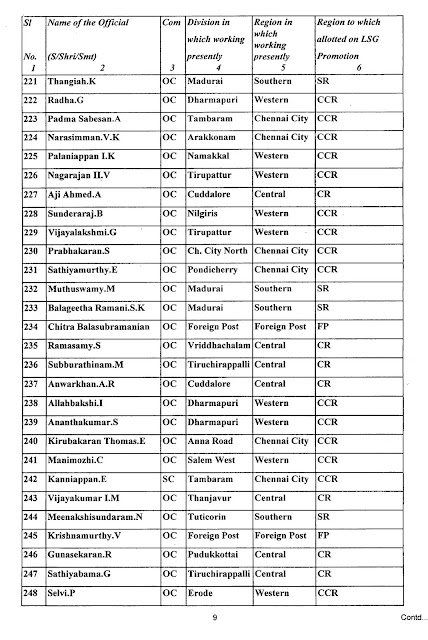 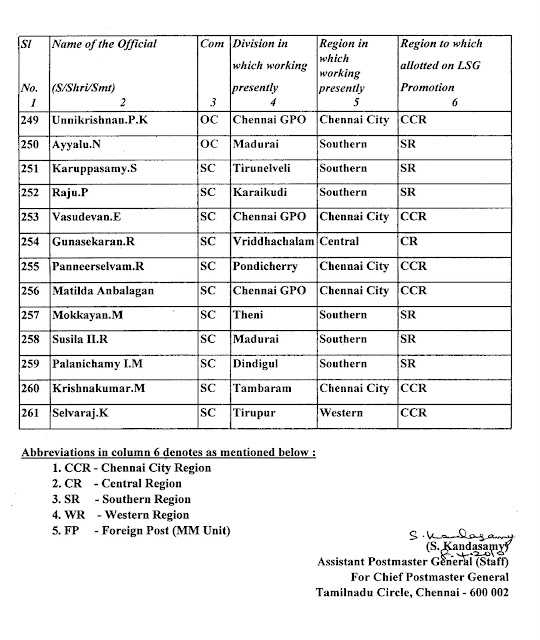 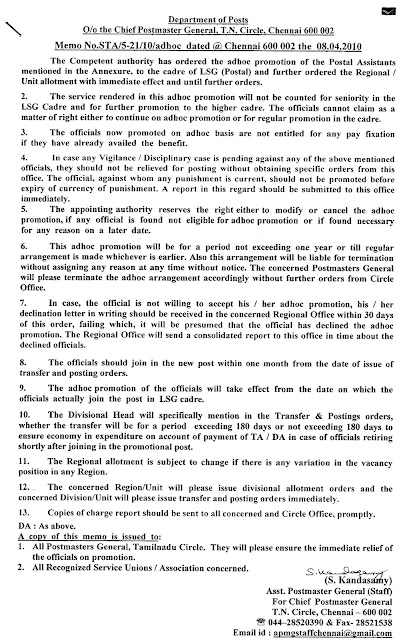 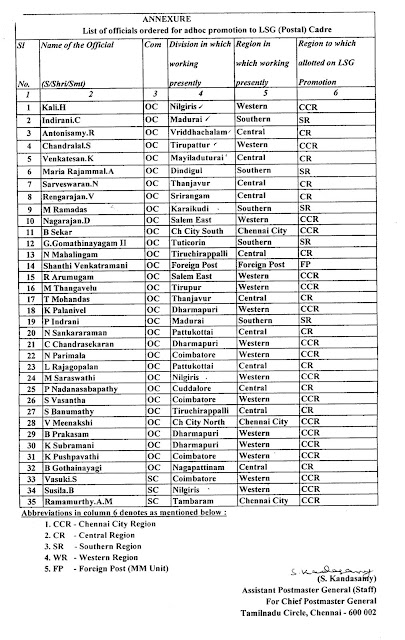 HON'BLE MADRAS HIGH COURT HAD EARLIER ON 24.03.2010 GRANTED AN INTERIM INJUNCTION FOR TWO WEEKS ON A WRIT PETITION FILED BY THE BPEF UNION -
BUT THE GOOD NEWS IS THAT INTERIM INJUNCTION IS NOT EXTENDED AFTER THE EXPIRY OF TWO WEEKS BY THE HONOURABLE COURT.
Re-verification Process is proceeding as scheduled - Complete the collection and submission of membership declaration forms before 26.04.2010
Bhartiya Federation P3 Union filed a Writ Petition in the Hon'ble High Court of Madras for cancellation of trade union facilities to NFPE and FNPO P3 Unions and IRM&ASRM Union. The Petition also challeged the Provisional Recognition granted to NFPE and FNPO.
Hon'ble High Court had granted two weeks injunction on 24.03.2010 but did not grant any stay on the Re-verification Process.
Yesterday the Case was noted for hearing and the AIPEU Group 'C' CHQ had filed its counter affidavit and ready for the hearing.
The hearing however did not take place as large number of cases were in the list – Today the Judge ordered for serving of Notice to all Parties and postponed the hearing without extending the Injunction,
Therefore the Trade Union Facilities of P3 NFPE; P3 FNPO; and IRM&ASRM Association who were Defendents in the BPEF Case which were cancelled based on the interim injunction two weeks back, has automatically stands cancelled and the recognized Unions automatically stands restored with the trade union facilities.
Whenever the hearing will take place, the same will be attended to by the Advocate of P3 CHQ and all efforts would be taken to defend the trade union rights of our organisations. NFPE will shortly take a decision on impleading in the case since the Petition challenges the Provisional Recognition of FEDERARATIONS also.
Trade Union Facilities of recognised unions continue be conferred on the NFPE and FNPO Unions etc and therefore all Comrades are requested not to worry about the propaganda let loose by the BPEF Unions.
Our sincerer thanks to timely action of AIPEU Gr-C (CHQ) and all efforts would be taken to defend the trade union rights of our organisations

No. 1(3)12008-EII(B)
Government of India
Ministry of FinanceDepartment of Expenditure
********
New Delhi, the 31th March, 2010
OFFICE MEMORANDUM
Subject:- Rates of Dearness Allowance applicable w.e.f. 1.1.2010 to the employees of Central Government and Central Autonomous Bodies continuing to draw their pay in the pre revised scale as per 5thth CPC.
-----------------------
The undersigned is directed to refer to this Department’s O.M. of even No. dated 29th September, 2009 revising the Dearness Allowance w.e.f. 1.7.2009 in respect of employees of Central Government and Autonomous Bodies who continue to draw their pay and allowances in the pre-revised scales of pay as per 5th Central Pay Commission.
2 The rates of Dearness Allowance admissible to the above categories of employees of Central Government and Central Autonomous bodies shall be enhanced from the existing rate of 73% to 87% w.e.f. 1.1.2010. All other conditions as laid down in the O.M. dated 3 October, 2008 will continue to apply.
3 The contents of this Office Memorandum may also be brought to the notice of the organizations under the administrative control of the Ministries/Departments which have adopted the Central Government scales of pay.
(R. Prem Anand)
Under Secretary to the Government of India